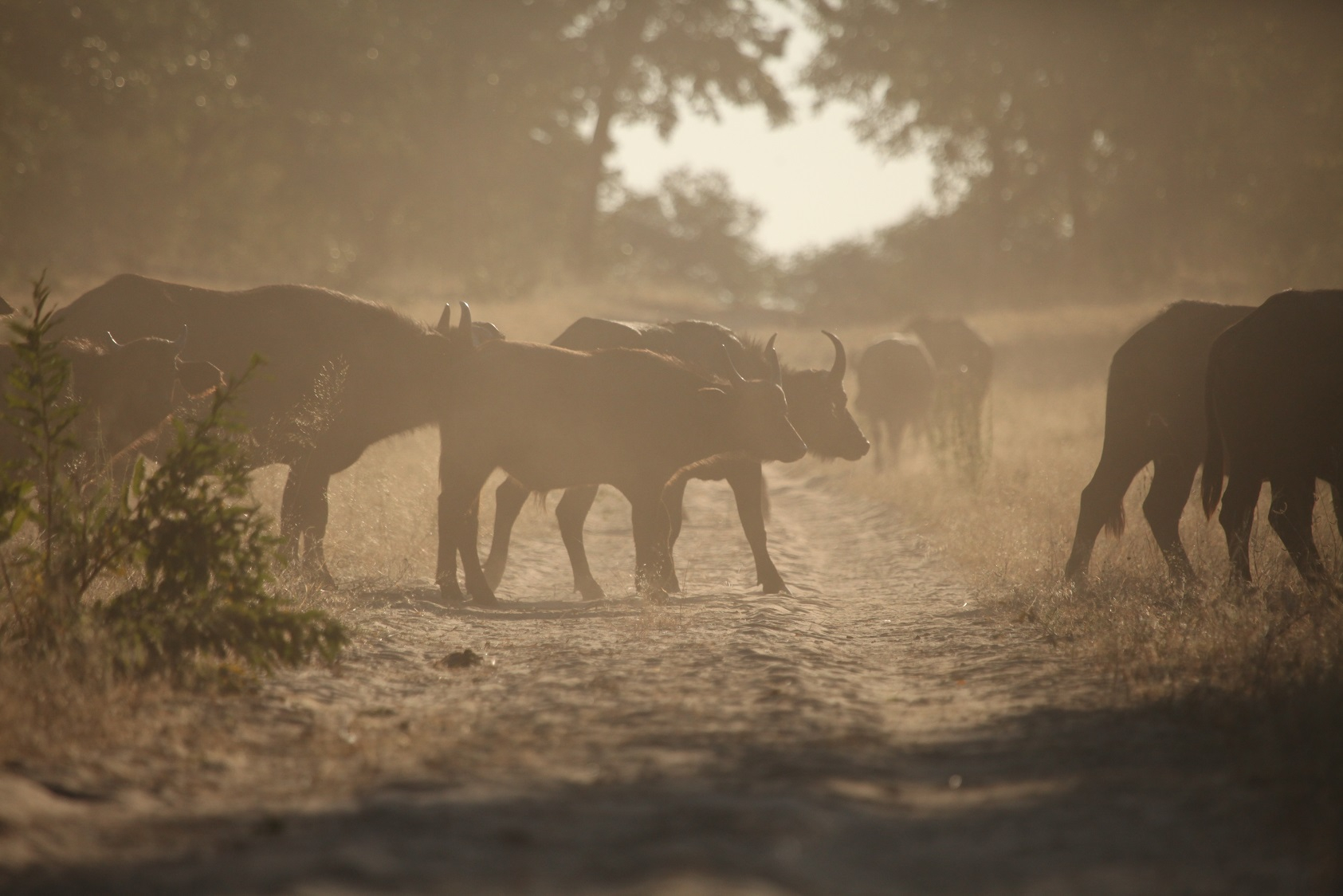 June was an eventful month at Machaba Safaris and the Ngoma Safari Lodge team was kept busy distributing food parcels between the six villages that make up the Chobe Enclave. The food parcels were received with open arms and much appreciation.

Back at camp, a large herd of elephants would arrive to visit the swimming pools almost every afternoon at about 17:00. We knew this was the same herd because a large female matriarch with a distinctive tear in her right earflap would lead them in as well as the presence of three new tiny calves within the herd.

One afternoon whilst walking back from the lodge to my house, I spotted the herd slowly making their way to the lodge. The opportunity to sneak into ‘Room One’ and watch the elephants from up close, safely behind a closed door, presented itself.

One of the three little calves snuck right in between the mother’s front legs in an attempt to reach the clean swimming pool water by itself. Little did the calf know, it was about to be graced by a tremendous shower of cold water!

The mother slowly filled her trunk with water, tilted it down to face the little calf, and sprayed every drop of the water into the calf’s face. The little calf stumbled out from under her and looked around in every direction as if wondering where on earth the sudden downpour had just come from.

After spinning in circles a few times and shaking its little head, the tiny elephant opted to rather play with one of the slightly older cousins, a few meters away from the rest of the drinking family members.

One morning on the way into town, I came across a single lioness walking along the tar road that runs between Kasane and the lodge. This road runs for 50km, right through the middle of this corner of the park. At first, I thought it strange that she was alone, then she began to contact call.

This was no ordinary contact call suggesting that she had lost a sister or any other lioness within the pride, but rather the contact call I have heard lionesses using to call their cubs. She was also lactating. I decided to stick with her and follow her for a while to see what would unfold.

Forty minutes later she paused and went completely quiet, looked back over her shoulder, and began crossing the road behind me, all the while flicking her tail into the air.

She paused again and called one more time, only this time two tiny little lion cubs, no more than three months old popped out of the long grass a mere ten meters in front of her. They gave off tiny little versions of her contact call in return and as she flopped over onto her side, they pounced all over her and played with her tail that was still waiving about.

My patience had paid off, and once the cubs had settled down to suckle, I left them in peace in the long grass to bond with mother. I was very lucky to see this sighting, often lionesses will not be as relaxed around vehicles with cubs this young.

Other than these precious elephant and lion sightings, our zebra also kept us enthralled with their antics.

A few of the camp managers got together one afternoon on the lower deck of the main lodge to watch the sunset. Suddenly, a rather long line of animals was seen coming down the hill past Room One.

Before we knew it the waterhole was absolutely filled with zebras and after a few attempts at counting to get an accurate number, we all agreed that it was impossible to be 100% sure with all the black-and-white stripes but that could have been at least 100 zebras.

This time of year, the zebra herds congregate to migrate from the Chobe floodplain to the Magadigadi salt pans and back later in the year, which is a 300-mile round trip. Herds within the National park will grow too much larger numbers, one seen recently was easily over 500 individuals.

Well, that’s it for another month and from all of us at Chobe Forest Reserve, we wish you a warm Ngoma farewell until next time.