We had an eventful October at Machaba camp with a celebrity visit being at the top of our guestlist this month. What an honour it was to have Botswana’s Olympic athlete, Nijel Carlos, spend time on safari with us! Weatherwise, the Okavango Delta was so hot that if you tried to walk barefoot on the sand it burnt your feet!

We had lions, lions and more lions this month!

A pride of eight lions took down an elephant close to a tree that had the Maghoto female leopard and her cub in it after an “impala kill”. This sighting was something to see! After the lions killed the elephant they noticed the two leopards in the tree. One of the lionesses greedily sprinted up the overhanging branch to try and steal the leopard's meal. The female leopard ran off and the cub climbed a tree with horizontal branches close to the elephant carcass. The little one was alone and surrounded. Thankfully, it managed to escape two days later and was soon reunited with mom.

In a separate incident, a single lioness took down a waterbuck at the river’s edge. She then dragged it out of the water and the rest of her pride joined for a feeding frenzy! Just then a large crocodile arrived and also made its way out of the water towards the feast. It tried to steal the waterbuck but was chased back by the lioness. At dusk, a male lion wandered in and claimed the waterbuck as its own and was later joined by two lionesses that began feeding with him. Dusk set in and hippos exited the water to investigate the day’s events. Although the lions ran to-and-fro, not a morsel was left behind.

One morning we noticed a seriously injured cub that we suspect might have been attacked by a crocodile while trying to cross the river. The little one died later that day. What transpired next has never been seen before, the cub’s mother and siblings started feeding on the carcass.

A clan of hyenas were spotted happily munching away at a hippo carcass, which was still partly laying in the River Khwai. It seems the hippo had succumbed due to injuries caused by territorial fighting.

And now, last but not least is my favourite sighting of the month! Huge swarms of African migratory locusts resembling dark storm clouds, descended over Machaba Camp! Seeing thousands of these acrididae in action was incredible, to say the least!

Well, that’s it for another month folks, be sure to watch this space for another exciting wildlife sightings report. 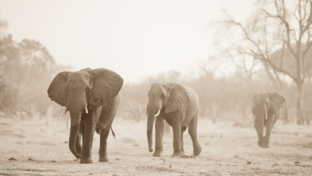 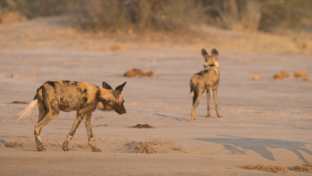