The start of February saw some very wet weather and very strong winds over the Okavango but luckily the rest of the month we were blessed with sweltering hot days and only a few showers. This wonderful change in the weather allowed for some great wildlife sightings!

We have been privileged to watch this mother cheetah with her cubs for the past 7 months, often finding them perched on top of termite mounds.This month however we got a special sight of the mother out hunting with her cubs. It was incredible to watch as she passed on her skills and techniques to the next generation.

A Fight For Dominance

The arrival of the three unknown male lions to the area recently has turned up the heat on the resident male lion Nagmerie. The three rogue males have been moving around the territory sniffing and marking their scent. Nagmerie, being the excellent father and protector of his pride, has been smart and has kept his distance to avoid conflict and keep his 11 cubs safe.

After a heavy thunderstorm one afternoon we heard loud roars coming from every direction. Miter went out with some staff to investigate and found Nagmerie and one of the rogue males locked in a battle that went on for hours. In the end, it seems it will take a lot more than this rogue male to knock Nagmerie off his throne.

Some New Faces at Camp

After arriving back from a few days of leave, we were so excited to see a small herd of roan antelope very close to camp. They seemed very relaxed with some even lying down. This was an incredible sighting for us as they are usually quite shy and we have never seen them out in the open this close to camp.

Eye Spy with a Leopard

During the rainy season, when the green grasses have grown nice and tall, it becomes almost impossible to spot a leopard. What were the chances then that we were able to spot just the tip of the leopard's tail in the long grass.

How amazed we were to find that she was not alone. Following very close behind her were her two very tiny cubs that were no older than two weeks. This rare sighting was one that we will not soon forget. 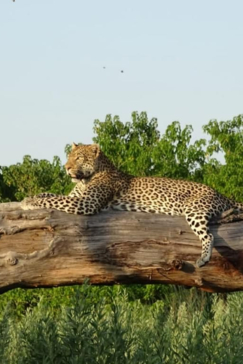 We love having guests on safari that are true twitchers. These twitchers always know their stuff. When it comes to birds there is nobody out there that knows more about the books, apps and calls than an avid twitcher. It's times like this when we like to take a backseat and let them test their knowledge. Luckily for us, we live in a birder’s paradise and being on safari here never disappoints.

This month has been much like the weather, very dramatic! With such incredible moments from cheetah cubs to leopard cubs and everything in between, we can't wait to see what the next month holds on safari in the Okavango. A Jewel of The Okavango