The January rains have continued, and along with them, the African bush continues to thicken and remains green.

Elephant sightings have exceeded guest expectations and, as herds continue to grow in size, the competition for food and water increases.

We have also noticed there has been a sudden birthing period and one of the herds frequenting the lodge waterhole and plunge pools near the rooms has at least five cute new calves.

On several occasions, a mega-herd of over 2,000 buffalo has been seen, sometimes with herds of elephants and zebra in the mix. Two lionesses follow, not far behind, hoping for a taste.

At least 90 per cent of our guests saw leopard when staying at Ngoma Safari Lodge in January. This brings to mind the question of when the best time of year for safari is? Most will say in the winter months because with less foliage on the trees and with the grass being much shorter, it is easier to see animals.

Whilst this is true, our summer months here in Chobe National Park are just as productive and come coupled with only the beauty of greenery and the occasional afternoon thunderstorm.

Wild dogs have been a strong presence around the lodge this month and the entire pack of 12 were here for four days straight. We were lucky enough to have the pack make three kills in the four days, right below the rooms and the main lodge.

Zebra herds are increasing in size due to the migration from the Magadigadi salt pans to the Chobe flood plain right below the lodge. It is always a sight to behold when a herd of 200-zebra and several giraffes congregate at our waterhole.

Your friends at Ngoma Safari Lodge

Want to read more about our incredible wildlife sightings? 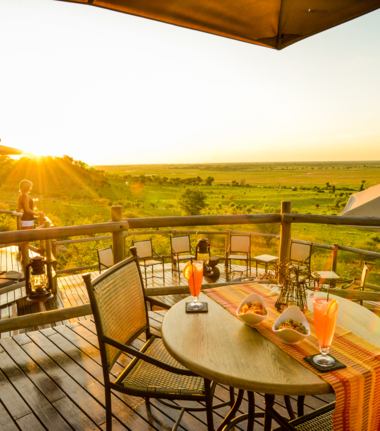