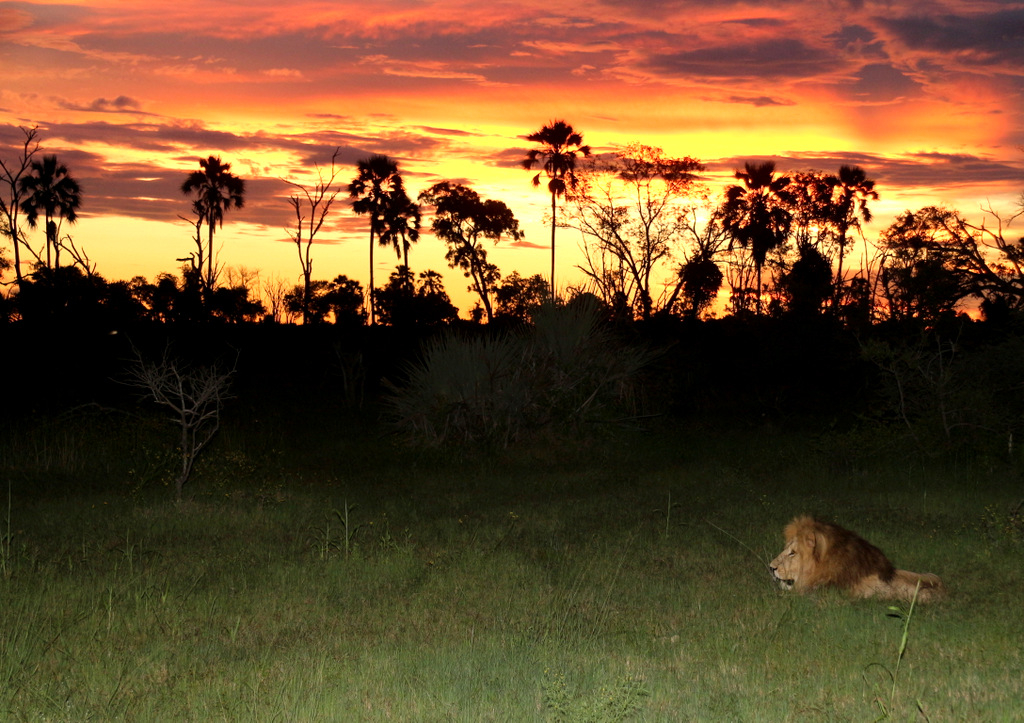 THE MONTH OF THE LION!

March was truly the month of the lion, with all other predators taking a backseat whilst the Gomoti Plains camp pride family drama unfolded.

Concerns over the runt of the pride, the small, bullied and unloved cub that vanished at the end of last month, turned out to be completely unfounded as its “wayward” mother returned with it to other cubs – with a further surprise – she had been hiding and nurturing another cub, the runt’s sibling, so now we have SIX young lions growing up close to the camp!

These 6 have kept our guests completely enthralled with their antics – exploring, playing and enjoying the attentions of the lionesses that spend their time grooming, feeding and loving them. Almost every guest has had the opportunity to spend as much time as possible in their company. In return, the whole pride has become even more tolerant of the game viewers with the lion cubs becoming quite inquisitive about their human observers.

The dominant male was introduced to his offspring in the middle of March. Initially he completely disregarded them, and was quite heavy handed if they came close, but he has slowly warmed to the cubs and now tolerates them playing around him and even using his tail as a toy. He did draw the line when the most inquisitive cub tried to suckle from him – The little guy got flicked away, landing  on its feet about 1.5 m behind his father, much to the amusement of the guests that saw this interaction! The two marauding lions that came into our private concession in February passed through without detecting the cubs, only to return in the latter half of the month. For a couple of nights the roaring of the camp pride male and the 2 would-be usurpers could be heard all around the camp keeping our somewhat nervous guests awake. This period included a night drive that followed the dominant male right into camp, much to the consternation of the welcoming party that were at the entrance with warm towels! To see this massive lion whilst on foot and in the dark is a very humbling experience!

Ornithologically speaking, we are still seeing some of the intra-Africa migrants, including the Woodlands Kingfisher and hundreds of Red-backed Shrikes, but the Bee-eaters all seem to have headed north. A small flock of Green Pigeons have taken up temporary residence in the camp whilst the leadwood trees are fruiting and the family of Barred Owlets is still entertaining the guests as they are escorted back to their tents every evening.

The main channel of the Gomoti River is navigable once more and our sunset motorboat cruises are back on the activity menu, along with the mokoro trips. Unfortunately, the very long grass has made bush walks a little dangerous and hence these have been suspended for the next month or so. The channel in front of the camp remains dry, but the two large floodplains that feed it are filling up nicely so we are confident that, within the next couple of weeks, we will have water – and hippos – back in front of the decks.

Until next month – happy game viewing!