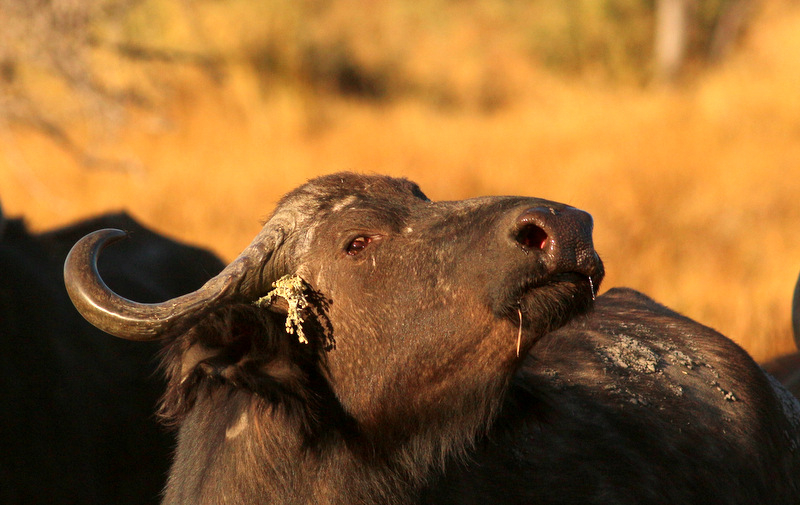 So where do we start to list this month’s highlights?

â—  Over 700 buffalo in the flood plain in front of the camp?
â—  Breeding herds of elephant crossing, drinking and bathing in the camp stream on a daily basis?
â—  The second flood of water entering the area even faster and deeper than the initial flood that got us so excited in April?
â—  Leopard attacking an impala in the pathway to tent 6 during the wake-up call patrol?
â—  A lioness walking down the main pathway at 3pm in the afternoon?
â—  Elephants shaking the palm nuts out of the palm trees at the entrance to camp?
â—  Lion killing an impala on the entrance road?
â—  A female cheetah with her 5 cubs?
â—  The dawn vocal competitions between the 2 nomadic lions and our dominant male?
â—  A young female cheetah losing her impala prey and being flung metres into the air by her adversary?
â— The return of our pride of lionesses and 6 young cubs?
â— Guests experiencing the thrill of tracking and finding rhino on foot – including a new born calf!!
â— Wild dog from the speedboat?

and so many more!

July is regarded as our peak season and it certainly did not disappoint – as the points listed above indicate.

Climatically, temperatures remained cool/cold in the morning, heating up as soon as the sun rises through the palm trees. As expected, we did not have a single drop of rain throughout the month  – and only a couple of days with cloud cover. The sage plains have all dried out and the palm tree fruits have ripened and are being enjoyed by both baboon and elephant alike. This dry weather makes us very susceptible to runaway fires and unfortunately this is exactly what we  have experienced. The large floodplain south of the camp caught alight and after a 48 hour fight it was brought under control. This has left a blackened scar, but will soon green over and attract numerous plains game. It was very interesting to see how the insectivorous birds were attracted to the fire, harvesting the grasshoppers that were trying to avoid the flames – at one stage we had 17 Lilac Breasted Rollers all competing in the same area for these tasty morsels!

While we are discussing the ornithology aspects of the month we can add African Scops Owl to the wildlife that  call the camp home. Not one, but two of these magnificently camouflaged mini predators has taken up residence in the trees in front of the kitchen, playing “hide and seek” with the staff on a daily basis.

Numerous guests have been able to boast that they have seen the “BIG 5” in a single day with very regular leopard sightings,  huge herds of buffalo moving onto the floodplains, breeding herds of elephant in camp, white rhinos in the mopane and lions everywhere!!

And we still have August ahead of us, with floodplains around the camp filling up and the pans inland all drying up, promising us even better sightings, if this is possible!

Until next Month—the Gomoti Team!