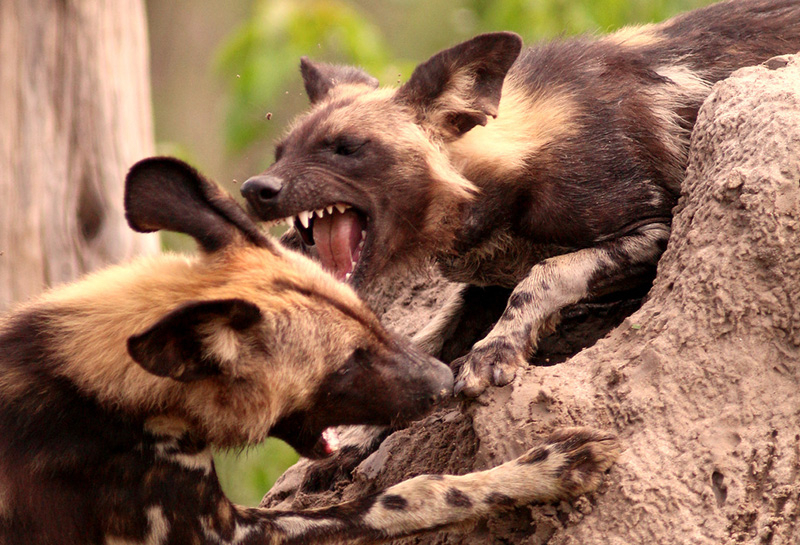 This really sums up this month’s sightings – and the fact that we have had over 200mm of rain!

After a hiatus of over 4 weeks the wild dogs have returned to our area – in abundance! Both the Plains pack (9 dogs) and the Mountains pack (28 dogs) have been seen regularly throughout the month. Memorable sightings include:

â—  The Plains pack stealing an impala kill from our young male leopard, only to lose it to a large male lion! Our guests witnessed the treed leopard and the lion chasing off the dogs! Three top predators at one sighting!
â—  The Mountain pack was found on an impala kill and after finishing it,    immediately went on to kill a new born buffalo calf right in front of the vehicle,  despite the mother’s best attempts to defend her youngster.
â— The Mountain pack successfully hunting both impala and kudu less than    500m from the camp on the same day.

Our localized lion pride had increased dramatically in size – with 2 cubs born in December and another 5 in February (from 2 different lionesses). The 2nd mother of the youngest single cub seems to have abandoned her offspring, with the mother of 4 reluctantly taken on this 5th cub into her litter.

Almost all of our guests in February spent quality time with these youngsters, but late in the month the mother opted to move them across the floodplain and the single youngster has not been seen for 3 days – watch this space for update on whether it has survived her latest move.

Interestingly, earlier this week the mother and dominant male father killed a large male kudu close to the cubs hide and despite the female bringing the cubs downwind of the kill, they showed no interest at all in this event.
Last week, a coalition of two very large male lions moved onto the concession and we await a confrontation with the dominant male. If this goes badly, or these 2 marauders find the cubs, the lion population may become depleted. Again, we will keep you updated! Our trio of leopards, mother and two adult cubs, seem to have split up and both progeny have successfully killed impala singlehandedly. The male lost half of his kill to wild dogs and lion as detailed above, but the female managed to drag her kill up a very thorny acacia and ate all of it over a 48 hour period – much to the delight of all our guests who witnessed her activities throughout this time.

From an ornithological perspective, the birdlife around camp has become even more spectacular! One keen group of birders managed to locate 168 species within a 72 hour visit with highlights being 100’s of raptors raiding termite eruptions after the rains, a full array of the magnificently coloured kingfishers and bee-eaters, an elusive Greater Painted Snipe as well a first sighting of Pririt Batis in the area. One of the top Zimbabwean birding guides who was here with American guests commented that this is the most diverse birding area that he has ever seen.

Climatically, as mentioned initially, we have had over 200mm of rain this month, with pools of water now starting to refill the channel in front of the camp. The reported floods, that promise to be even better than last years, have already started to reach the delta and a preliminary report from one of our guides in the northern corner of the concession indicated that the Gomoti River is starting to flow again. This bodes well for future wildlife activities and hopefully we will be in a position to resume mokoro and motorboat safaris in March.

Other rare and unusual sightings include Porcupine with babies, an African Wild Cat hunting in the open in middle of the day, Cheetah, Civet, Serval and overnight a hippo took up residence in the shallow pan adjacent to the Maun road!

Until next month – happy game viewing!